In modern agriculture age, new fertilizers, pesticides, and other agro products are being manufactured with use of Phosphorous Acid – H3PO3 (instead of phosphoric acid), phosphite (instead of phosphate), and phosphonite or phosphonate. Major difference between Phosphoric acid and phosphorous acid is Phosphoric Acid is used as plant nutrient and the Phosphorous acid (H3PO3) is primarily used as fungicide applications. In simple words phosphates can use as fertilizer but will have no effect on plant diseases and on the other hand, phosphites are useful in managing Plant Diseases.

However, Phosphorus Acid cannot be used directly as a nutrient material. Hence they are generally supplied to plants in neutralized state. When Phosphorous acid (H3PO3) is neutralized with Potassium hydroxide (KOH), it forms the salt of phosphorous acid – Potassium Phosphite (KH2PO3), also known as phosphite or phosphonate. Potassium Phosphite are available commercially, because it is slightly unstable – phosphite tends to react and to do things, therefore it is highly recommended to consume upon opening or storage in air tight container.

Phosphite salts can be used as a biodegradable fungicide to protect plants against Phytophthora dieback.

Phosphite (亚磷酸) works by boosting the plant’s own natural defences and thereby allowing susceptible plants to survive within Phytophthora dieback infested sites. It is important to note that there is no treatment that will eradicate Phytophthora dieback, including phosphite. However, an integrated approach can successfully control the spread and impact of the disease. An integrated approach may combine strategic phosphite treatment, fumigants, controlling access, correcting drainage problems, removal of host plants and implementing excellent hygiene protocols.

Phosphite controls many species of Phytophthora, including Phytophthora cinnamomi. Phosphite is not toxic to people or animals and its toxicity has been compared to table salt. There is a very low pollution risk associated with phosphite. When phosphite is sprayed on to the foliage of plants, it is applied at a very low rate, so any phosphite that reaches the soil is bound to the soil and does not reach the water table.

Phosphite needs to enter a plant’s water transport system in order for it to be effective. This can be done by injecting phosphite into trees, or spraying the leaves of understorey plants. Phosphite not only protects a plant from Phytophthora dieback infection, it can also help a plant to recover if it is already infected.

Phosphite (PO3) molecules, which move systemically via the phloem and xylem to the leaves and roots. This means that an entire plant receives many benefits of the phosphite molecule. With phosphite, a plant’s natural defense mechanisms are heightened so that diseases are more easily repelled. Phosphite encourages the nucleus of a plant cell to produce defensive molecules such as phytoalexin, which attacks the disease directly. The production of polysaccharides strengthens the cell wall adding additional protection. The cells also send “alarm signals” to cells that have not yet been attacked.

There are few commercial products available in the local market, to name a few… 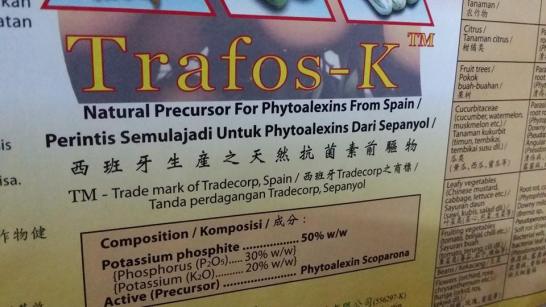 The content of product in the market is rather confusing to consumers, however they are same kind of fungicide to combat Phytophthora, reason being partly due to marketing strategic.

Potassium Phosphite by gaharujinkou
….Dilute 50gm part A and 50gram part B into a liter of water. Use this reagent as follow .. highly recommended to use Mini pump …