Why do you use  past knowledge to do tomorrow?
为什么还要用过去的知识来做明天的事?

Why do you use last century’s concept to do new century’s business?
为什么总是用上世纪的观念来做本世纪的生意?

A ship sinks, it does NOT mean to be sunk. It is a submarine.

Kynam is a supreme grade in agarwood industry, and a species proven to be artificially cultivated as well.

Many hardcore players boom blasting me, when i told kynam is a species. They believe that the cause of Kynam is the result of various mutations in the agarwood tree, which cannot be artificially grafted and planted. Well, i suggest that their rock-solid complacency has to be softened, transform the way you view happenings around you.

Respect to all, artificial cultivation of Kynam is a fact and is NOT an assumption. In China, the traditional agarwood trees are gradually being replaced by the Kynam agarwood trees. Ever since the breakthrough of kynam grafting in 2012, no one has thought about planting traditional agarwood. “Traditional agarwood planting” of the past is now… history or better yet, archeology. Listen less to hardcore experts, practice is a very important criterion, if not the only one, to test the truth. That’s the truth, this new species may slowly change the perception of many people.

Traditional trees were modified to “Kynam”

How fast will this trend dye into worldwide market, as many of the agarwood cultivators had been severely hurt by the traditional agarwood demand. Almost all agarwood growers face the same problem. Too many people enter the market with their dreams, and finally leave in disappointment. The ending is all unsalable, because the quality cannot be compared with the wild, and the price is higher than the artificial material in Vietnam.

In the past, all farmers who had planted agarwood trees had only two choices. First… to give up their efforts because the outcome was too poor, and it would be useless to work hard. Or to choose to upgrade to Kynam as shown in the photo.

The excellent performance of Kynam agarwood varieties, all traditional agarwood trees will be eliminated in the future, and the world will use grafted seedlings as the mainstream, will be the trend. 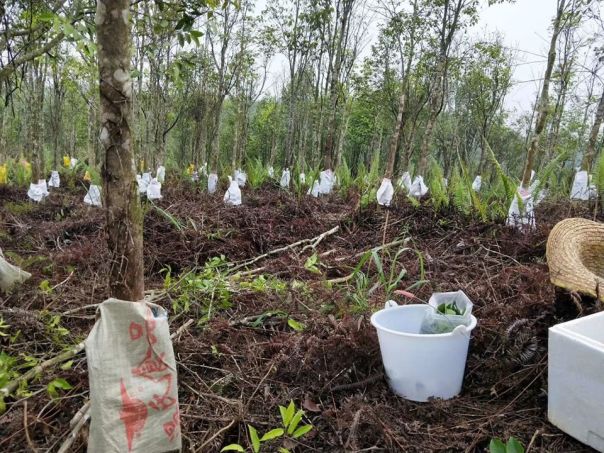 Traditional trees were modified to “Kynam”

We were told … “Research showed that traditional agarwood tree should be minimum 12 years old before artificial induction, this is because the resin duct system of the tree would have been mature by then.” Anything harvested earlier than that … is considered premature harvesting which ends up to be low quality product.

This statement is true if we were to apply on traditional species of agarwood. New happening is happening in agarwood industry, we should NOT anchor the “Past knowledge to do tomorrow’s business”.

For next 3 years, is your business sustainable? The emergence of digital world has made many traditional businesses in buried. Kynam (self-inoculation) species will eventually replace the traditional agarwood business. Matter of time, man-made inoculation technology will find its graveyard to rest in peace or better yet in  ………….    p  i  e  c  e  s

This is Kynam … something difficult to explain by words if you have not explored it personally.

The following videos show that majority of the kynam trees were mechanically stressed at the age of 3 years and 1.5 ~2 years agglutinating time prior to harvest.

Next reading in sequence … “ Harvest “