The three main sources of nitrogen, used in agriculture are urea, ammonium and nitrate. 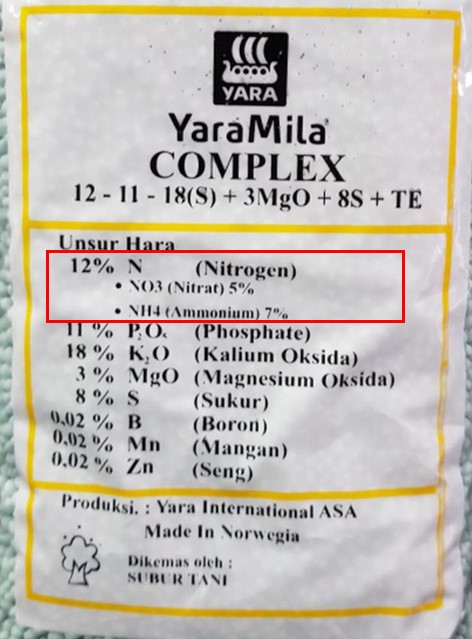 The biological oxidation of ammonia to nitrate is known as nitrification. This process consists of various steps, as demonstrated in Figure 1, and is mediated by autotrophic, obligately aerobic bacteria. In waterlogged soils the oxidation of NH4+ is thus restricted. Urea is decomposed by the enzyme urease or chemically hydrolyzed into ammonia and CO2. In the ammonification step, ammonia is converted by ammonium-oxidizing bacteria into ammonium. In a next step, ammonium is converted by nitrifying bacteria into nitrate (nitrification). 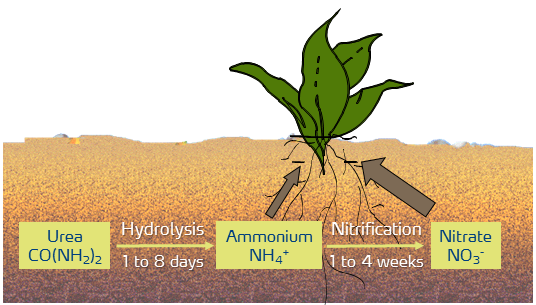 The nitrogen conversion rate depends on the conditions, present in the soil for nitrifying bacteria. Nitrification of NH4+ to NO3– preferably occurs under the following conditions:

Ammonium may accumulate in the soil, when this nitrogen conversion is limited or completely stopped if one or more of the following soil conditions are present (Mengel and Kirkby, 1987):

Advantages of nitrate over ammonium-containing fertilisers

Nitrates are the preferred nitrogen source: 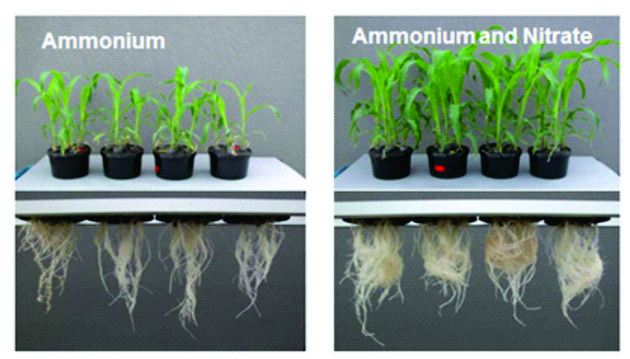 In soils, Knight et al (2000) found high NO3– as opposed to high NH4+ nutrition to be beneficial in a consideration of potato yield, a number of quality characteristics, and higher financial return for the grower. Their study was conducted in the Sandveld of the Western Cape, South Africa, where low soil pH, and the lack of clay and organic matter in the soils disfavour nitrification. Three differing ratios of ammonium to nitrate, namely 80:20, 50:50, 20:80, for three differing levels of N were compared. Best results in terms of grower return were achieved when 80 % of the required N was applied as NO3– and 20 % as NH4+. 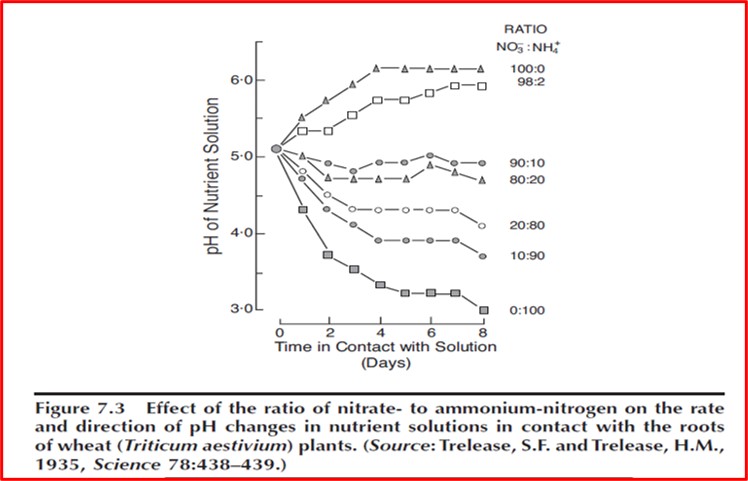 Where NO3– : NH4+ application rate differences have been of issue, similar conclusions have been drawn in a number of other crops regarding increased performance (Italian ryegrass – Cunningham, 1963; citrus – Van der Merwe, 1953; tomato – Kafkafi et al, 1971).

In hydroponics, standard quantities of NH4+ added to nutrient solutions for soilless culture are between 5 and 10 % of the total N supply and seldom will exceed 15 %. For rose it tends to 25 % during the vegetative stage, whilst for melon it tends to 0 % during fruit development, for example.

The conversion of NO3– that occurs in the leaf is a process fueled by solar energy, which makes it an energy-efficient process. However, NH4+ in the roots has to be converted into organic N-compounds first. This process is fueled by carbohydrates and thus occurs at the expense of other plant life processes, such as plant growth and fruit production. These sugars have to be delivered from their production site in the leaves, down to the roots first. 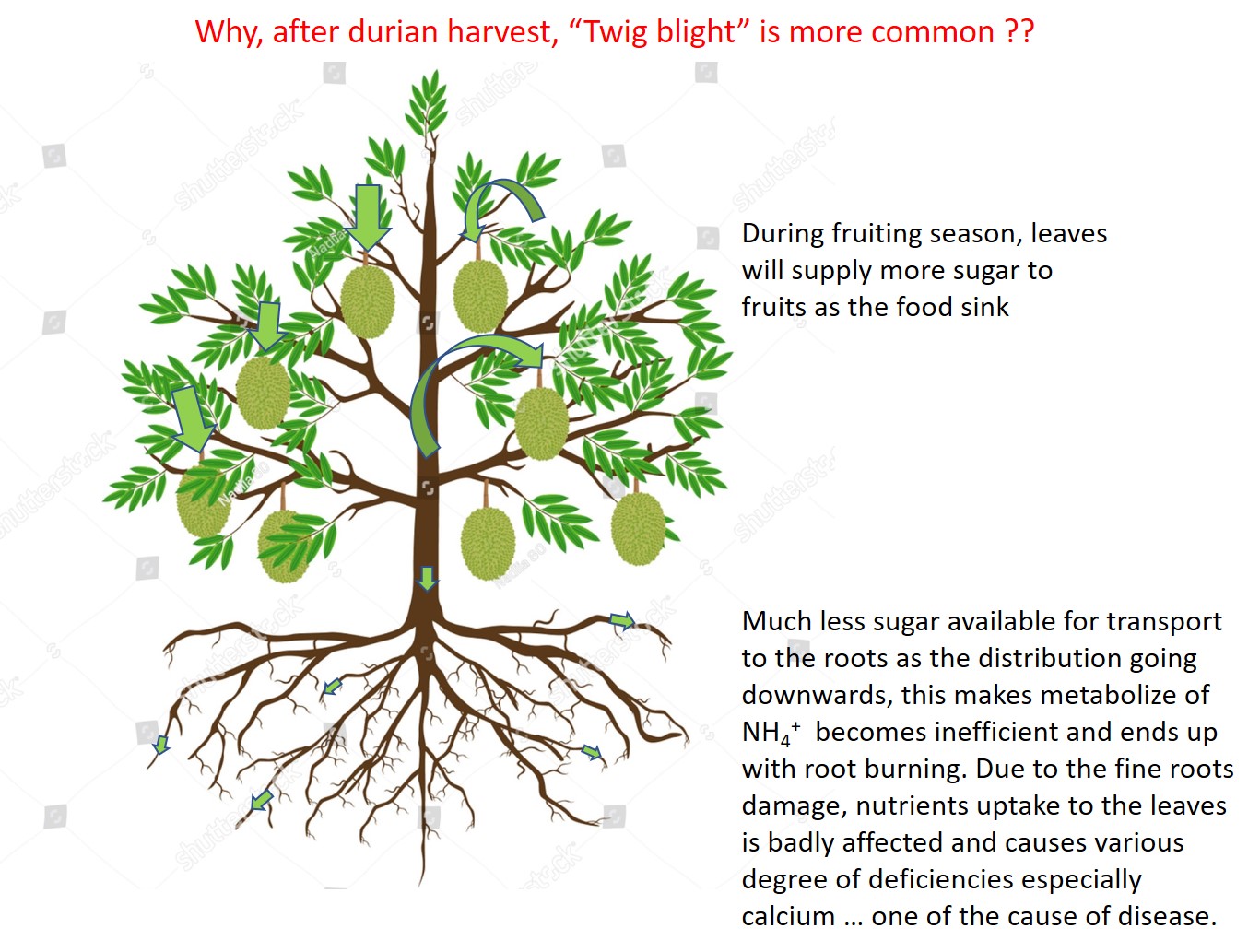 When NH4+ levels are higher, sugars need to be transported down from the leaves to the roots to metabolize the NH4+. In flowering and fruiting plants, such as tomato, cucumber, and durian, sugars are consumed quickly near their production site and are much less available for transport to the roots. In this case, NH4+ will not be efficiently metabolized and therefore the use of a lower NH4+/NO3– ratio is preferable. 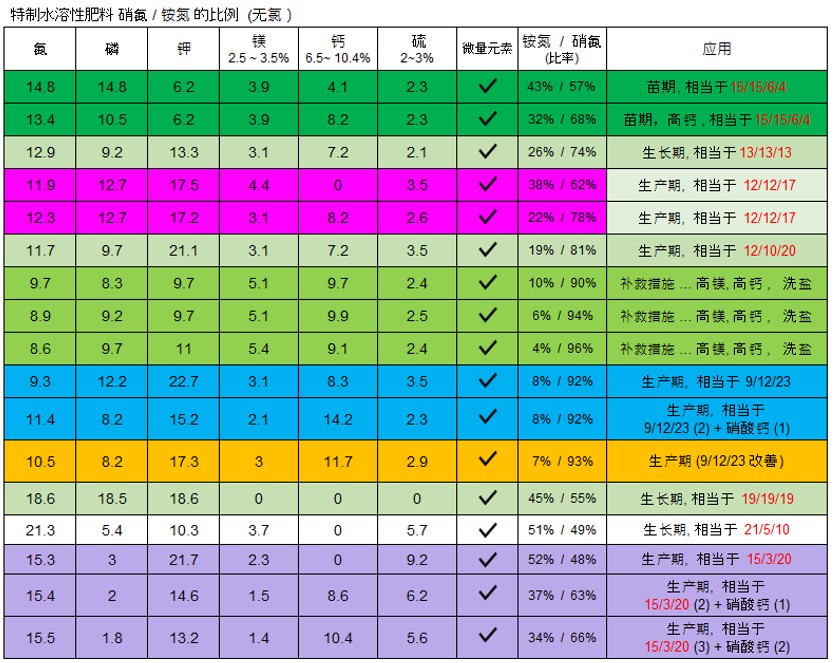 Addition of NH4+ as a replacement of NO3– in substrate systems can reduce the uptake of other cations, like K+, Ca2+ and Mg2+, which can be explained by cation competition of NH4+ and these cations.

Click here for details .. Ionic Balance in Different Tissues of the Tomato Plantin Relation to Nitrate, Urea, or Ammonium Nutrition

The proportion of these effects depends of different factors like crop, growing conditions and the adjustments made in the ionic balance of the nutrients. Therefore, a careful use of NH4+ is recommended for crops which are sensitive to Ca deficiency. This is especially true when such crops are grown under climatic conditions that reduce the Ca transport to fruits. Good examples of this are the production of tomato and sweet pepper under dry and hot conditions. Both crops are sensitive to blossom-end rot, caused by Ca deficiency in the fruit, which is stimulated by a hot and dry climate. Under such conditions every reduction in Ca uptake becomes dangerous and thus, the use of NH4+ too (Sonneveld and Voogt, 2009).

Difference between “硝态氮与铵态氮” in chinese version

Next reading in sequence .. “Ammonium toxicity“