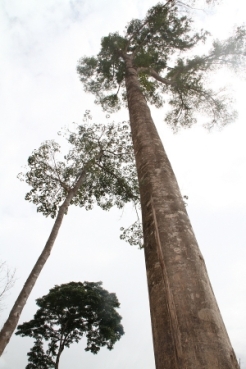 Its well-managed Agarwood plantation has been opened for tourism purpose. The Gaharu Tea Valley of Gopeng has steadily climbed up the ranks as an eco-tourism site since its opening, and is today a major tourist attraction in Perak, and one that is identifiable on many major online mapping and travel sites. I visited there 2 times, first was in 2010 and recent one was June 2012. Hundreds of people visited the plantation and many even hug the trees for luck. I was told that the giant tree which stood steadily on top of the hill had met its misfortune — struck by lightning somewhere in Sept 2012.  What a pity, the tree has given her way.

This photo was captured in Dec 2012,  during  a Seminar Gaharu Kebangsaan organized by MTIB.